skip to main | skip to sidebar

As part of the programme to reduce the number of animals roaming free on the island of Sal in Cape Verde, the Câmara Municipal (City Hall) today announced that all dogs must be registered by their owners. 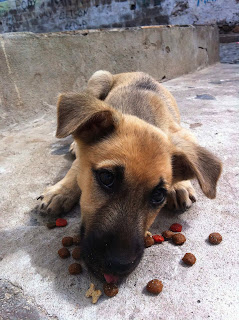 Registration is just one part of encouraging dog-lovers to become more responsible owners.  In addition, owners will, in the near future, be required to either confine their animal or to keep them on a lead when in public places.  Hopefully, this will also help with the problem of dog mess on the beaches and streets.

Contrary to popular belief, the majority of dogs wandering freely in Santa Maria, on the southern part of the island, are not stray, but are allowed to roam by their owners.  In a census completed by SOS Cães e Gatos (SOS Cats & Dogs) in 2011, just under 80% of dogs found in the street were claimed by someone.  In addition, the majority of the animals are now sterilised thanks to four intensive clinics that have seen 2,500+ animals neutered since 2010.  The results of this work are already being seen, with far less puppies & kittens being born on the island now.

The concept of dog 'ownership' is different in Cabo Verde than in other parts of the world and until now, it has been acceptable to let the dogs be free.  Now, however, with the growth in tourism and the need to keep the beaches clean, things are beginning to change.  It is hoped that the population will embrace these changes.

In order to register your dog you should visit one of the locations (the old Câmara Municipal building in Santa Maria) mentioned on the poster below and bring your dog's vaccination record (if you have one) and your own identification.  Registration will cost CVE 300.  In return you will receive an identification tag.   If you have registered your dog at the Câmara Muncipal before, you will not have to pay, but you should still take your animal to transfer to the new scheme.  Please don't forget to bring your dog on a leash!  After you have done this there will be an annual license fee of approximately CVE 400.

It's important not to miss the deadline because, although you can still register after this date, it will be more expensive. 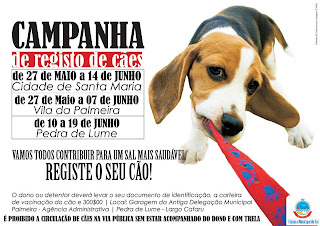 The registration and the requirement to control your dog are part of a series of proposed regulations that are expected to pass into law later in the summer.


The message is clear!  If you love your dog, register them, vaccinate them and take care of them!
Posted by Jacquie at 12:33 PM 3 comments:

If you would like to protest against what happened to this dog, we suggest you voice your opinion directly to Josh Angulo.  You can easily find contact information using a search engine or on facebook.  If you would like to join the campaign for more humane treatment of dogs on Sal in general (using this incident as an example) you can contact the Mayor of Sal Jorge Figueiredo or the Counciller for the Environment.  Please do not use abusive language, polite protest works best!  Thanks for your support.

On Sunday 3 March on Praia Antonio Sousa an owned dog, Cookie, was involved in an unfortunate incident that resulted in a child receiving a bite on the ankle.  The dog, although large, is friendly and not known to be aggressive, but was startled and reacted in an inappropriate way.

The child was quickly attended to and witnesses have stated that it was not a serious bite.  The proper way to deal with an incident like this is to hold the owner accountable for the dog and if the matter is not resolved, to involve the police.

Unfortunately the beach club owner, Josh Angulo, who is a well-known windsurfer who recently competed in the Red Bull Storm Chase in Ireland, reacted in anger & aggression.
An eye witness report states :